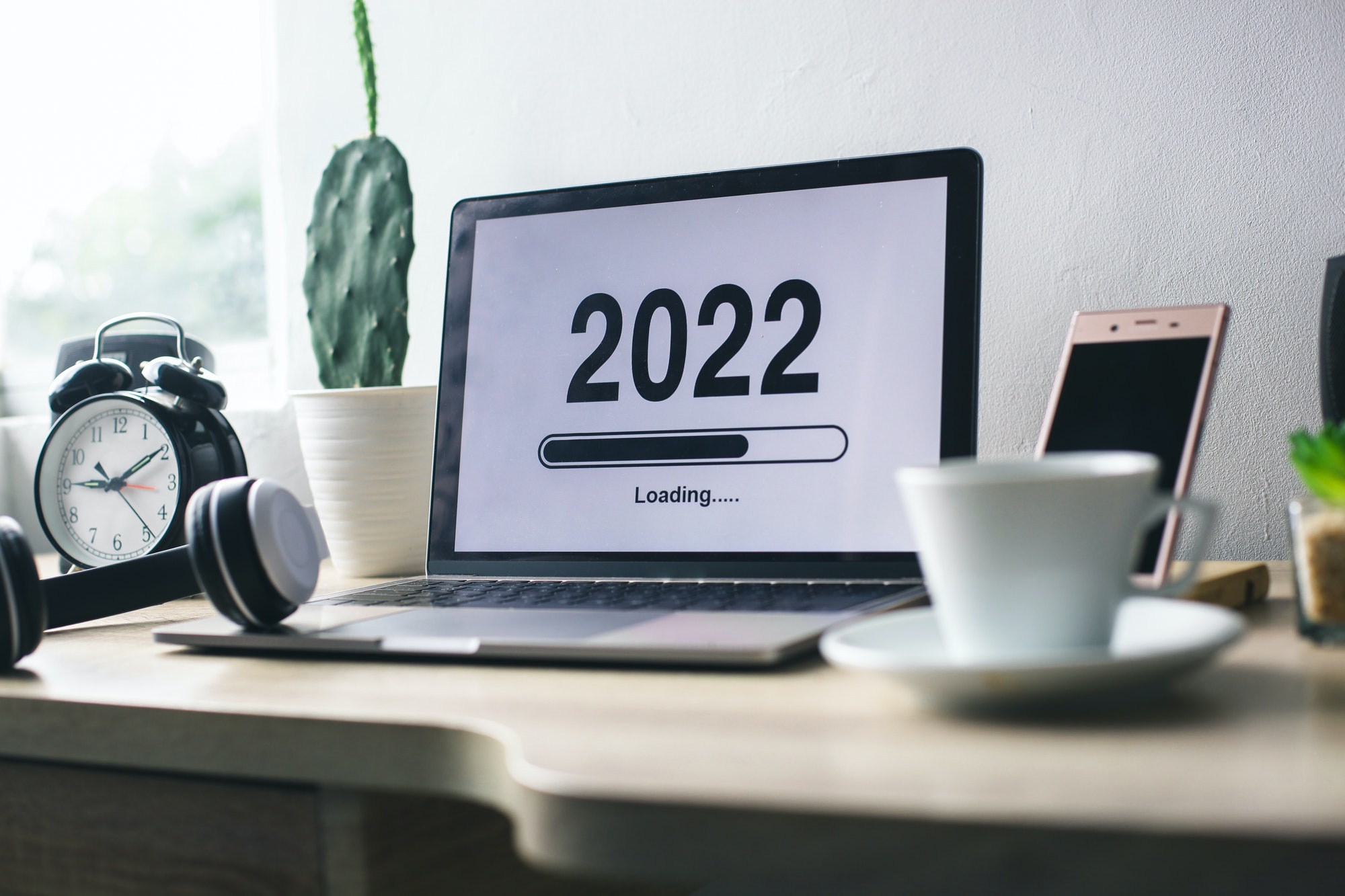 The first quarter of 2022 was uniquely challenging as most major asset classes turned in negative returns, and asset classes that have historically provided stability (bonds) to a portfolio were down more than more volatile asset classes (stocks).  Indeed, U.S. bonds, as measured by Bloomberg U.S. Aggregate bond index, suffered its worst quarter in more than 40 years, falling nearly 6%. Including last year’s 1.5% decline, U.S. bonds are now down nearly 7.5% in the last five quarters.  U.S. stocks, as measured by the S&P 500 index, were down 4.9% in the quarter, but the index suffered a peak-to-trough decline of 13% before rallying into the end of the quarter.  The tech-heavy Nasdaq 100 and the small-cap portion of the U.S. equity market were both down over 20% from their highs at one point in March, and international equities continued to lag the performance of U.S. stocks. Commodities were the one asset class that did show positive returns in the quarter, and we participated in that with our gold and silver holdings.  There have been numerous periods in the past that have been far worse for specific sectors, particularly equities, which were down over 20% to start the year just two years ago (2020). However, viewed as a whole, the new year has been quite difficult because one of our key investment tenets – owning a well-diversified portfolio of uncorrelated assets – was largely ineffective in the current environment. 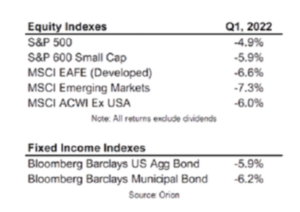 The economic recovery from the pandemic recession has been bumpy with surges in economic output being impeded by supply shortages and curtailed by new waves of the virus. However, by the end of 2021, the U.S. economy was on solid footing, having already exceeded its pre-recession output level. Nominal GDP growth in 2021 was more than 11% and real GDP (nominal less inflation) was up nearly 6%, both are well above the long-term trend. The labor market has improved rapidly, with the unemployment rate falling to 3.8% in February 2022 compared to 6.2% a year earlier, and the latest data shows roughly 5 million more job openings than unemployed workers.  Moreover, corporate earnings have recovered spectacularly since the big declines in early 2020 and hit a new all-time high in 2021.

Although we enter the second quarter on solid footing, the market is struggling with the implications of several key risk factors.  First, inflation remains very high with the February headline CPI coming in up 7.9% year-over-year; this is before the impacts from Russia’s invasion of Ukraine and the associated economic sanctions. Russia is one of the three largest oil producers in the world, and Russia and Ukraine are also large producers of various commodities including natural gas, coal, wheat, fertilizer, steel, aluminum, and neon.  These commodities are key inputs into the production of various items including food, electricity, and semiconductors.  Having the supply of these commodities removed from the market is creating fears of a supply shock and driving the prices of these commodities up significantly. The price of crude oil, for example, rose to over $130 per barrel in the weeks following Russia’s invasion and remain in the $100-$110 range compared to the mid $70’s at the start of the year. As a result, there is growing concern in the market that inflationary conditions could persist much longer than previously anticipated and that these inflationary pressures could negatively impact consumer spending and/or corporate margins/earnings.

The second area of concern is rising interest rates.  During the quarter, the yield on the benchmark 10-year Treasury bond rose 80 basis points to 2.32% from 1.52% at year-end, while the yield on the 2-year Treasury bond rose 155 basis points to 2.28%. Credit spreads have also generally widened, meaning that interest rates are rising even faster for most other bond categories.  One notable example is the average 30-year fixed rate mortgage which surged more than 50% to nearly 5% at quarter end. This is the largest 3-month rise in mortgage rates since 1987 and current mortgage rates are now at levels last seen in 2011. Such sharp increases in interest rates have the potential to constrain both consumer and business activity, going forward. Rising rates could also have a negative impact on equity market P/E multiples.

The third main concern for the markets is the flattening of the yield curve.  At the end of the quarter, the spread between the 10-year and 2-year Treasury bond was 4 basis points, down from 79 basis points at the end of 2021. There was also a brief period toward the end of March where the yield curve inverted (meaning the 2-year yield was above the 10-year yield).  Historically, an inverted yield curve has been a reliable recession signal. You can see this in the chart below, as each time the yield curve spread fell below zero a recession (gray bars) followed.  It is true the recession did not happen immediately, and it is also true that the inverted yield curve has not been sustained currently, but it does represent a key indicator that we and most other investors monitor closely.

In summary, we think economic and corporate fundamentals are currently very strong, however many of the key underpinnings of that strength – low inflation, low commodity prices, low interest rates, aggressive fiscal stimulus – are changing. We expect that economic and corporate earnings growth will continue to slow from last year’s rapid pace, however the extent of the slowdown and whether we ultimately experience a recession is unclear at this time. From experience we know that uncertain environments such as these are often characterized by increased volatility, so we would expect the volatility experienced in the first quarter to continue.  In response, we have been positioning our investments more defensively by raising cash, reducing cyclicality in the equity portfolio, and adding a position in Treasury bonds.  We still think equities are the best positioned asset class for the long-term, especially the equities of companies that have a strong competitive moat around their business, enabling market share gains and the ability to pass on inflationary pressures through higher pricing of their products and services.  We have been using the recent volatility to gradually add to our positions in these types of companies, and we expect to continue to do so with the cash we have raised in the months ahead.  Moreover, one silver lining to the weakness in the bond market over the past five quarters, is that bonds are much more attractive today than they have been over the past few years.  As discussed, yields are significantly higher now and, from current levels, bonds should also do a better job of adding stability to a balanced portfolio as bond prices often rise when equity prices are falling.

Please do not hesitate to contact any  member of our wealth management team if you have questions, comments or concerns you would like to discuss. We appreciate the opportunity to work with you.

Disclaimer: We recommend you review and consider any recent market news. All expressions of opinion are subject to change without notice in reaction to shifting market or other conditions. Its accuracy, completeness or reliability cannot be guaranteed. Nothing contained in this message should be construed as a recommendation.

Whitney & Company helps every client realize their aspirations so that they can live their best life. The firm is here to make clients’ lives easier by taking the emotion and worry out of their finances.